After an extended development, prolonged by the challenge of being the first rear-wheel-drive in the previously-exclusive front-wheel-drive R3 category, the car is now eligible to compete in any rally which runs to FIA regulations, including the World Rally Championship. By bringing rear-wheel-drive back to the stages, the CS-R3 is a uniquely exciting 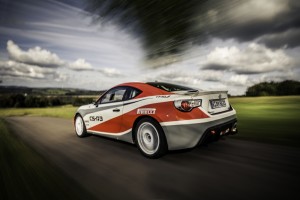 car for drivers and fans which draws on TMG’s illustrious rally heritage. The TMG-run TOYOTA Team Europe enjoyed its first successes in the 1980s with the rear-wheel drive Celica Twincam Turbo, a multiple Safari Rally winner. Inspired by that heritage, TMG’s latest rear-wheel-drive rally car is intended for private customers, delivering a competitive R3 car which combines the racy good looks of the road-going GT86 with spectacular rally performance. Significant effort has gone into the two-litre, normally-aspirated boxer engine which, like the car, is not a familiar configuration in R3. To add a further challenge, R3 regulations required the compression ratio to be decreased from the road car standard. Using TMG’s state-of-the-art engine development tools, changes to the engine internals and software have resulted in a maximum power of 232hp, and peak torque of 235Nm. To deliver a true motorsport feel, the CS-R3 has a six-speed sequential transmission from gearbox specialists Drenth designed specifically for rear-wheel-drive cars, and limited slip rear differential. A weight optimisation programme has enhanced the already-nimble handling of the GT86 while upgraded suspension, brakes and exhaust ensure peak performance on the stage. There is no compromise on safety, with safety items and protective roll cage supplied as standard. TMG will demonstrate the CS-R3 on selected events this year prior to the inaugural season of the HJS R3 Trophy which takes place within the framework of the German Rally Championship and begins in 2016. The Trophy will feature up to 10 CS-R3 cars and offers over €5,000 of prize money at each round, with a commitment to run for at least the next three seasons. The CS-R3, including complete chassis and powertrain, is sold in kit form for €84,000 (excluding VAT).

Nico Ehlert, Principal Engineer Customer Motorsport: “Finalising the homologation of the CS-R3 is a big moment for TMG and also an exciting one for rallying. It is a long time since a new rear-wheel-drive car has been FIA homologated so this has presented some challenges in the development phase. We have worked hard while some have doubted us without knowing the full picture. But we are grateful for the patience of those supporting our project and we believe that seeing the car in action proves it is really worth the wait. The reaction of fans and drivers has been even more satisfying; it’s clear there is a huge support for TOYOTA in rallying and many still remember the pure spectacle of a rear-wheel-drive car at full throttle on the stages. We are proud to have brought those two factors together and we look forward to a successful new era for the CS-R3.”