2015 season Kawasaki Racing Team signing Jonathan Rea took his Ninja ZX-10R to pole position after Superpole 2 was cut short by a red flag incident, meaning Rea scored his first Kawasaki Superpole win at the first attempt. Tom Sykes (KRT) was unlucky to not have a real chance to set a fast lap early on because the second Superpole session would not run its full course. Rea set his pole lap on a race tyre and like the rest of the main riders was set to make another lap on a qualifying tyre. After David Salom (Kawasaki Team Pedercini) suffered a fast and hard highside crash the Superpole 2 session was red-flagged and eventually not restarted, leaving Rea on pole and in the perfect starting place for Sunday’s two 22-lap races. Salom underwent medical checks at the circuit after his crash and has not suffered serious injuries. Sykes was left disappointed to not have the chance to set a fast lap of his own as he was preparing to go for his ultimate lap time when the red flags came out. Because the session was not restarted to run its full planned 15-minute duration he is now faced with a third row start on Sunday. Tom was particularly disappointed because he had realistic ambitions of being on the front row after finishing second in the free practice session that precedes Superpole. The 4.445km long Phillip Island circuit is expected to offer its usual tough challenge to all comers on Sunday, especially as temperatures are expected to be hot and the track temperatures correspondingly high.

Jonathan Rea: “It was a strange way to end the session. From my point of view we did a good job with a race tyre in the high temperatures and the Kawasaki is working very well. We made a good set-up breakthrough in free practice four. I am really happy with pole position because it is the best possible result from qualifying. I also wanted the chance to use the qualifying tyre, however, because I know the Kawasaki uses the Q tyres very well too. So the lap time could have been quite good. But, this is still the best possible result for me after Superpole.”

Tom Sykes: “I feel very strong for the two races tomorrow but starting from this position on the third row of grid is obviously not what we wanted. I do not know about having a second chance to set a good time, it was just having a chance. I am a little bit speechless. I saw David have a very, very big crash and my first thoughts were with him but the final grid order is completely mixed up because everybody was building up to use a qualifying tyre. I am on the third row and this gives us a lot more work to do on our tyres. We will do the best we can tomorrow now.”

The heavy crash experienced by David Salom (Kawasaki Team Pedercini) looked severe but David was conscious afterwards, talking, moving his limbs and not seriously injured – although heavily beaten up in the trackside gravel. He qualified an eventual 11th, having made it into Superpole 2 directly, after ending combined qualifying eighth quickest earlier in the day. Local wildcard rider Jed Metcher had the honour of qualifying in front of Aussie legend Troy Bayliss before Superpole, taking his Race Centre – Demolition Plus Ninja ZX-10R to 16th at that stage, and the ending up 15th on the grid after Superpole’s final qualifying results were declared. (da: Kawasaki Press) 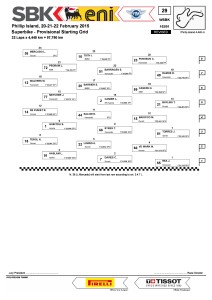