New World Champion Jonathan Rea (KRT) was only 0.004 seconds from the Superpole winning time at Magny-Cours and thus he will start Sunday’s races from second place on the grid after a dramatic and wet Superpole 2. Tom Sykes (KRT) fell in the 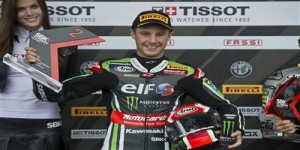 tricky conditions and despite being unable to make the restart of Superpole 2 he finished ninth, for a third row start to Sunday’s races. Rea had been fastest in regular qualifying and Sykes fourth, but with a sudden change in weather conditions Superpole was run in full wet conditions, undoing all the team’s preparations for a time. It was looking good for Rea to earn another Superpole win right at the end of the restarted session, but he lost his advantage in the final sector by exercising caution in the final downhill run to the last corners. Leon Haslam (Aprilia) took pole despite having crashed out shortly before the end. Sykes was unable to get the required heat into his wet tyres and slid off without injury at high speed. He had already set a time good enough to get him into the top ten. He will now have work to do to clear traffic in the early laps of Sunday’s races at a circuit he has enjoyed success at in the past. Whatever the race day weather brings now the team and riders have gained experience in all track conditions, and will be ready to face the scheduled 21 laps in each race.

Jonathan Rea stated: “I was so nervous because going down the last hill into the final complex it is like a sheet of water and there were no riders in front to make a line. Every lap I was so nervous there. I saw on the big screen that my sectors were red, red, red, meaning I was fastest but I just bottled it in the last part! Everything was going good earlier in Superpole and I was P2, P2 and then the red flag came. I went back to pitlane and nobody was in the Superpole enclosure. My crew chief Pere said, “pitlane opens again in ten seconds.” So I had to go again, with the same tyres. The problem is keeping heat in the tyres because I had slowed down and come back into pitlane. I had some moments on my out lap under deceleration, which is the main issue we need to improve in wet conditions. But it was fun. To be on the front row is good because we have done a lot of work over the weekend in dry conditions. Then being suddenly thrown a wet session, which I was nervous of, a front row start was the best we could have hoped for.”

Tom Sykes stated: “It was such a shame to fall but we did not have the initial grip in the first two laps and I was waiting for the tyre to come to me. I had a crash with no warning so it is just one of those things. The track grip was at a low level and the temperature was very low. It was a very fast crash and there was no time to save it. With the one bike rule, it was game over, so I was disappointed with that. After the fall I was expecting to be last in the session so I was much better off than I thought. From the third row tomorrow it will be a little bit harder in the beginning. Tough, but not impossible. At the start you are only a few metres off the leading bike so we just need to make it count in the first few laps.”