150 new smarts on 1300 square metres: at Miniatur Wunderland, the world’s largest model railway, the smart model change has already taken place. A good week before the launch of the real smart on 22 November the mini fleet has been replaced. A total of 90 new fortwos and 60 new forfours are deployed in the whole miniature layout – for example, at Knuffingen airport, at the smart dealership, on a car train and a truck transporter. At the same time the first car2go fleet is being launched in Miniatur Wunderland.

Knuffingen, one of the oldest and most important towns in Miniatur Wunderland with around 10,000 inhabitants, is known for its traffic jams and lack of parking spaces. The new smart generation will relieve the strain on the idyllic town located between the Harz region and the Alps. Because with a length of just three and four centimetres respectively, the new smart fortwo and the new smart forfour are ideally designed to fit into any parking space. The fortwo even has a turning circle of less than eight centimetres. “We in Knuffingen appreciate the little things”, says Frederik Braun, first mayor of Knuffingen and co-founder of Wunderland. “But we don’t give them preferential treatment”, he warns in view of the enhanced driving fun. 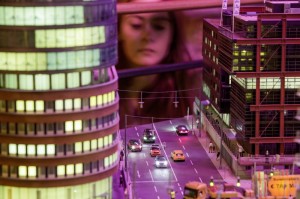 “So please don’t exceed the speed limit in the new smart either.” Because the Knuffingen police are after speeders: speed cameras are located below Schlossberg. Braun says that it is often travellers who are in a hurry: after a construction period of more than six years Knuffingen airport opened in 2011. Today the airport is a worldwide hub thanks to its proximity to Switzerland and with 40 different aircraft types taking off and smart – a Daimler Brand landing. The new smart models are also deployed at Knuffingen airport. car2go customers can now also simply pull up and fly off: they can return their car2go smart at Knuffingen airport and set off on holiday without having to worry about high parking charges whilst they’re away – just like in real life. The first car sharing fleet is being launched in Miniatur Wunderland with 50 new car2go smarts. More than twelve million visitors: Miniatur Wunderland Miniatur Wunderland, the world’s largest model railway and one of Germany’s biggest tourist attractions, is located right on the Elbe, in Hamburg’s Speicherstadt warehouse district. Since it opened in 2001, more than twelve million visitors have experienced this world of fascinating technology, detailed constructions and meticulous handiwork. Miniatur Wunderland occupies an area of more than 1300 m2, from Scandinavia to the USA, from the waterfront to high mountains. Further information is available at: www.miniatur-wunderland.de, http://www.miniatur-wunderland.de/presse/ and http://www.knuffingen.de The little car even smaller: smart model cars on three different scales For your own model railway or a display case: at the end of November the new smart fortwo and forfour will go on sale as high-quality model cars. Mercedes-Benz is cooperating with the model car specialists Norev and Busch to produce miniature smart models painted in the original colours on a scale of 1:18, 1:43 and 1:87. Like the originals, the miniature smarts feature bright colours and a wide range of equipment.