The ŠKODA 130 RS is considered an outstanding representative of ŠKODA’s 114-year racing tradition. “The 130 RS continues to shape the ŠKODA brand’s good reputation in motorsport to this day,” says Michal Velebný, Coordinator of the ŠKODA Museum restoration workshop. “Getting this racing car onto the track in former communist Czechoslovakia was no mean feat, demonstrating the technical skill and commitment of ŠKODA’s development team and engineers of that time.”

ŠKODA Motorsport Director Michael Hrabánek adds, “ŠKODA is proud of its great motorsport tradition and racing car icons like the 130 RS. This awareness of the brand’s outstanding motor racing history also drives our current motorsport activities. Four wins in the WRC 2 and four national titles for the new ŠKODA Fabia R5, as well as the fourth APRC title in a row for ŠKODA are some of the highlights of our 2015 season.” 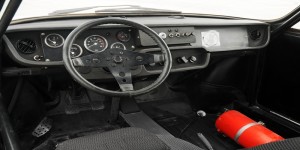 ŠKODA 130 RS was known as the ‘Porsche of the East’. One year before presenting the model, ŠKODA had already laid the foundation for the brand’s new era in motorsport with three ŠKODA 200 RS racing prototypes, driven by the desire to also compete in higher volume racing classes. Until then, the brand had entered cars mainly in the <1300 cm3 categories. The 200 RS marked the first time ŠKODA had used the ‘RS’ designation, which is short for ‘Rally Sport’. Since the 200 RS prototypes could not meet the new official regulatory standards, ŠKODA designed the 130 RS racing car. As a true lightweight, the ŠKODA 130 RS weighed in at only 720 kg. Selected body panels were made of aluminium, such as the roof, the bonnet and the outer shell of the doors. The mudguards and bonnet were made of fiberglass-reinforced plastic (FRP). At the front, ŠKODA used the front axle from the 200 RS, and the rear axle was designed from scratch. The model also received its robust protective frame from the series-produced ŠKODA 110 R. The ŠKODA 130 RS was powered by a 1.3-litre four-cylinder petrol with OHV valve control. The 140-horsepower engine could take the car to 220 km/h. The engine’s sports capabilities were made possible by the two Weber twin carburettors, an eight-channel cylinder head and dry sump lubrication. The cylinder and crankcase were made of aluminium, the cylinder head from cast iron. A four-speed transmission was used in the gearbox. Initially, there was also a version with five gears, but this was no longer used following the 1976 change in official regulations. The results from the package comprising modern engine technology, lightweight design and motor sport fine-tuning were impressive. ŠKODA’s new racing car made a very successful start to the 1975 racing season at the 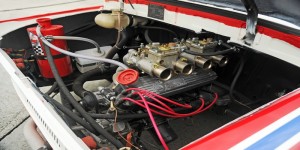 Czechoslovak Peace and Friendship Cup. A ŠKODA 130 RS took first, second and third place in the overall rankings. Over the following years, the model achieved numerous top rankings in prestigious circuit races at home and abroad. Greatest triumph: ŠKODA’s overall victory in the 1981 European Touring Car Championship. The ŠKODA 130 RS had already achieved an excellent result, coming third in the European Championships a year earlier. The ŠKODA 130 RS also caused a stir on the national and international rally scene. The car took its first Czech victories in the debut season of 1976. The ŠKODA 130 RS’s finest hour was in the 1977 Monte Carlo, taking a double victory in the <1300 cm3 category. At the wheel of the two winning cars were driving teams Blahna/Hlávka and Zapadlo/Motal. There was yet another victory one year later in the Rally Sweden. In 1980, the ŠKODA 130 RS dominated the Barum Rally, taking positions one to five. More leading rally rankings had been achieved before the 1983 season. The era of the ŠKODA 130 RS’s success ended in 1983. The FIA’s homologation, which had already been extended, had now expired. ŠKODA continued its motorsport activities with the ŠKODA 130 LR (130 hp). This model, however, could not build upon the success of the ŠKODA 130 RS. The ŠKODA RS’s reputation for speed, which began with the ŠKODA 130 RS, represents the brand’s power and emotion today. ŠKODA’s most recent RS model is the new Octavia RS 230 – the sports-tuned version of the successful ŠKODA Octavia RS. The additional ‘230’ designation relates to the horsepower of the 2.0 TSI petrol engine, accelerating the car from 0 to 100 km/h in 6.7 seconds. The top speed is now limited to 250 km/h by law, making the Octavia RS 230 the fastest series-produced Octavia ever. ŠKODA has been on the motorsport scene since 1901. Taking victories in races and racing series around the world highlights the carmaker’s technological skill. ŠKODA’s founding fathers, Laurin and Klement (L&K), launched the brand’s motorsport success; just two years after presenting the first motorised L&K two-wheeler, young factory driver Narcis Podsedníček participated in the Paris-Berlin endurance race on an L&K singlecylinder motorcycle in 1901.

In addition to celebrating 40 years of the ŠKODA 130 RS, ŠKODA AUTO has achieved several other significant milestones this year, including 120 years since Laurin and Klement founded their company, and 110 years of automobile construction in Mladá Boleslav. This makes ŠKODA one of the longest-established vehicle manufactures in the world. What began with Laurin and Klement in 1895 has since grown into an internationally successful volume manufacturer with 7 model series and around 40 model versions. Producing more than 17 million ŠKODA vehicles since 1905 proves the strength of the brand.