Michelin’s first race back in the premier class of motorcycle racing after a seven-year absence has been marked by a record-breaking performance by World Champion Jorge Lorenzo as he stormed to victory at the Losail International Circuit in Qatar this evening. Starting from pole position, Yamaha’s Lorenzo got the hole-shot at the start of the 22-lap race, but was passed on the first lap by the Ducati’s of Andrea Iannone and Andrea Dovizioso. The Spaniard stayed in-touch with the pair and after Iannone unfortunately crashed out on lap-five as his tyre slid on the white line, Lorenzo 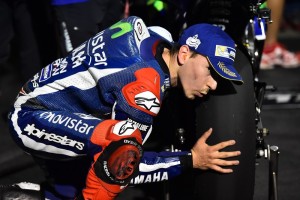 closed down Dovizioso and passed him four-laps later. The triple MotoGP World Champion then set about increasing his lead as a three-way battle for the remaining podium places developed behind him between Dovizioso, Honda’s Marc Marquez and Valentino Rossi also on a Yamaha. Lorenzo’s tyre selection was a hard MICHELIN Power Slick on the front, paired with a soft MICHELIN Power Slick on the rear; this was different to the choice of his team-mate Rossi who went for the hard front and medium rear, the same as Marquez, whilst Dovizioso chose the soft front tyre matched with a soft rear. Lorenzo’s choice served him well as he constantly set the fastest laps of the race, before breaking the circuit lap record – which had stood since Casey Stoner set it in 2008 – on lap-16, he then bettered that on lap-20 with a time of 1’54.543 – 0.226-seconds better than Stoner’s – showing the durability and consistency of the Michelin tyres. Lorenzo crossed the line in a race-time of 42’28.542, over seven-seconds quicker than last-year’s race. Behind the winner, the battle for the remaining positions on the podium began to heat up as the race drew to a close, with the three protagonists all in contention for the two places, Marquez made a successful pass on Dovizioso on lap-18, but the Ducati-man fought back and re-took second position on lap-20. The pair swapped places again, with Rossi in close attendance looking for a way through, before Dovizioso took the chequered flag in second, from Marquez in third and Rossi a close fourth. Today’s race was watched by 11,737 fans at trackside – the biggest race-day crowd at the Qatari circuit – and they were treated to a race that not only saw Lorenzo’s record-breaking performance and the battle for the podium, but hotly contested encounters all through the field. Honda’s Dani Pedrosa had a race-long tussle with Suzuki’s Maverick Viñales to take fifth, with Pol Espargaro narrowly beating his team-mate Bradley Smith to take seventh – and the position of First Independent Team Rider.  Hector Barbera on a Ducati took ninth place with another Ducati, this time of Scott Redding, rounding out the top-ten. Michelin and the MotoGP paddock will now take the long journey across the Equator and deep into the southern hemisphere as the championship travels to Termas de Rio Hondo in Argentina for round two on Sunday 3rd April, a race which is part of a double-headed fly-away tour, culminating in a trip to Austin in Texas the following weekend.

“I am very happy to win the first race of Michelin’s comeback. I have been really pleased with the work that they have done to improve the front tyre and the rear was able to maintain the pace for the whole race. I want to congratulate Michelin for this return and I am very happy to get the 25-points today.”

“This has been a very important weekend for Michelin, seven-years away has seemed like a very long time! MotoGP has evolved a lot and we came here proud of what we have done, but also quite cautious. The results over the weekend have been very good and we are pleased with what happened here today. The riders and tyres were very fast and constant, and when we want to translate this from the track to the street, this is the kind of performance we can use.”

“This is our first race after seven-years away and this has been a very pleasing result for us. The lap-record by Jorge Lorenzo on lap-20 and the whole race faster by more than seven-seconds over last year’s – with the same conditions – has been a confirmation that we are heading in the right direction. We are thrilled with this result and with the improvements we have made through the winter. We are now looking forward to the next race and the rest of the season.”

“For the first race of the season I was very pleased. The tyre choice was different from rider to rider and all types of tyres worked quite well. At the end the lap-times were very good and so far everything has gone well, I hope we can continue with the rest of the season like that”