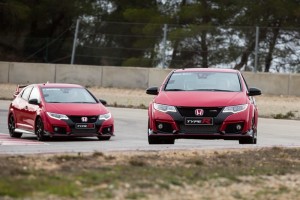 Toni Bou and Castrol Honda WTCC driver Tiago Monteiro, who have claimed 25 world titles between them, at the Castelloli circuit near Barcelona. The guests were given ‘hot lap’ experiences by the quartet, enabling them to feel the power of the Type R’s 2-litre VTEC TURBO engine and the outstanding handling afforded by racing car-bred aerodynamics and adaptive suspension that ensures optimal traction and stability. Not only that, but they were then given the chance to sample all this – and the car’s ‘+R’ button, which provides a pure track-driving experience – for themselves with a series of high-performance skills tests at the circuit’s racing school.The event once again showed off how lessons learnt on the race tracks of the world have been used to create superb road experiences on both two and four wheels, as was previously shown in Italy last year when Honda’s WTCC and BTCC squads teamed up with the LCR Honda MotoGP team for a very special VIP and media event. At the end of the day, Marquez, Pedrosa, Bou and Monteiro were given the keys to their own Civic Type Rs, which they will have at their disposal throughout 2016. A video edit from the Civic Type R experience is available for embed via the Honda Racing WTCC YouTube Channel.

Marc Marquez, Repsol Honda MotoGP “It’s amazing that a car designed for road use can provide a sporty driving experience like the Type R does. It’s not only the power of the engine, but also the possibility to press the “R+” button, which provides added engine response, with a harder steering action for a more consistent feel and a more intense driving experience.”

Dani Pedrosa, Repsol Honda MotoGP “I’ve been waiting to have a chance to try the Civic Type R on the track and to really push it to 100 per cent, because you really can feel every last detail of the car. Even driving it on the road is a very special experience.”

Tiago Monteiro, Castrol Honda WTCC “The experience you get from the Type R is amazing. As a racing driver, I know what we mean when we talk about the thrill of driving on track. It’s fascinating that a road model can provide such similar sensations as the race machine.”

Toni Bou, Repsol Honda Trials “It’s amazing! I owned the old Type R and I can see and feel a lot of improvements with the new model. It has very, very good corner speed as well as incredible stability under braking. There’s also excellent power from the engine.”