Ford today announced that the all-new Focus RS high-performance hatchback will deliver a maximum power output of 350 PS. The Ford Performance-developed model features a unique version of the new 2.3-litre EcoBoost engine that debuted with the all-new Ford Mustang. Ford will demonstrate the performance of the all-new Focus RS to the public for the first time at the 2015 Goodwood Festival of Speed, U.K., where Ken Block – Gymkhana and World Rallycross star – will tackle the famous Hillclimb at the wheel of a prototype car.

“We promised enthusiasts a serious driving machine and, with 350 PS under the hood, that is exactly what we will deliver,” said Dave Pericak, global director, Ford Performance. “The stunning pace and innovative technology of the all-new Focus RS place it head-to-head with performance models from luxury and exotic marques, and it’s ready for the challenge.”

The new 2.3-litre EcoBoost engine for the all-new Focus RS shares its fundamental structure with the all-aluminium four-cylinder engine in the all-new Ford Mustang. The engine has been significantly upgraded for the Focus RS to deliver 10 per cent more 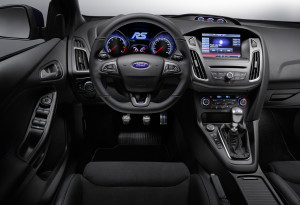 power with 350 PS maximum output. Increased power is generated by a new low-inertia twin-scroll turbocharger with larger compressor that delivers significantly greater air flow, along with a much bigger intercooler to maximise charge density. Engine breathing also is enhanced through a less restrictive intake design, and a large-bore high performance exhaust system with an electronically controlled valve in the tailpipe that helps optimise the balance of back pressure and noise output. The cylinder head is produced from an upgraded alloy material capable of withstanding higher temperatures, while the cylinder block employs stronger high-tensile cast iron liners. Engine cooling also has been given the highest priority, with engineers creating additional space within the front of the vehicle to house a significantly larger radiator pack – the biggest ever fitted to a Focus – which provides the level of cooling demanded for intense circuit driving. Meticulous calibration work has ensured that the power unit delivers excellent low-end responsiveness with a powerful mid-range pull, climbing to a free-revving top-end up to a maximum rev limit of 6,800 rpm. Maximum torque of 440 Nm is delivered between 2,000 and 4,500 rpm, with 470 Nm available for up to 15 seconds on transient overboost during hard acceleration. Inspiring performance demands an inspiring soundtrack. Ford Performance engineers have tuned the RS to deliver a rewarding and sporty sound character during spirited driving, with the distinctive burbles and pops that are a RS signature.

“This very special 2.3-litre EcoBoost unit will inspire drivers as they feel the surge of the turbo, and reward them as they take it to the red line – all delivered with a visceral sound guaranteed to put a smile on your face,” Pericak said.

Developed by a team of Ford Performance engineers in Europe and the U.S., the all-new Focus RS is the third generation of Focus RS cars, following models launched in 2002 and 2009. The 30th car to wear the legendary RS badge, the Focus RS will be built in Saarlouis, Germany. Focus RS is one of 12 new performance vehicles Ford will bring to customers globally through 2020 as part of a new era of Ford performance, and will be available for delivery to European customers from early 2016.