Audi is once again displaying bold exhibition architecture at the IAA International Motor Show. In place of a traditional convention booth, a multimedia experience space invites visitors to discover Audi’s four key themes at the IAA 2015 with all of their senses: Audi Sport, quattro, Audi Technologies and Audi ultra. The company is therefore constructing a temporary building at the Frankfurt exhibition grounds. Placing the latest edition of Audi’s bestselling model in its centre, 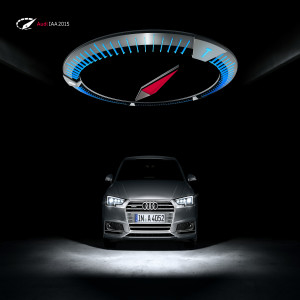 the architectural showcase will provide spectacular staging for the new Audi A4.

“We’ve never developed an exhibition presentation that was as thematically stringent as this one. Never before have we been able to describe the innovations from Audi in such great detail. At the 2015 IAA we will be offering our visitors more of an experience than ever before. This is a unique combination,” says Luca de Meo, Board Member for Sales and Marketing at AUDI AG.

The entrance to the Audi building is the starting point for the so called “experience walk”, a corridor encircling the car exhibition in the building’s interior. The roughly 100 metre course leads visitors through Audi’s four key themes at this year’s IAA: the motorsport genetics of the Audi Sport sub-brand, the portfolio of innovations under the title “Audi Technologies” ranging from the Audi virtual cockpit to laser lights, the efficient technologies of Audi ultra and the quattro all-wheel drive success story. Innovative presentation formats in the experience walk appeal to all senses, from the quattro ice room at 21 degrees below zero Celsius to a holographic window that uses augmented reality to connect digital information about the Audi technologies with the physical automobiles on display. The new Audi A4 introduces many of the presented technology highlights to its segment. It stands in the focal point as the experience walk leads to the car display. The bestseller from Audi is positioned at the centre of the building on a rotating platform that is part of an oversized 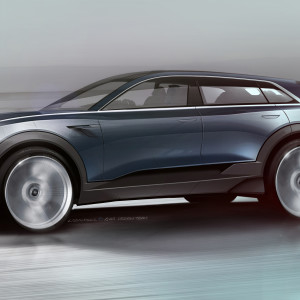 compass. As soon as the compass turns to one of the four cardinal directions, the entire media display of the exhibit switches between the four thematic worlds of Audi. Another look into the future provides the Audi e tron quattro concept. Visitors will be able to experience it for the first time in the Audi building at the IAA. The sporty SUV provides an outlook on the brand’s first large series electric car.  Audi’s temporary three-story structure at this year’s IAA is constructed on an area of 70 by 55 metres on the central Agora square of the exhibition grounds. Construction work began already in mid July; in all, more than 200 kilometres of cable will be laid and nearly 700 square metres of LED surface installed. The exhibition area inside the building will offer space for 33 automobiles. Audi was previously represented with its own brand buildings at both the 2011 and 2013 IAA Cars. The exhibition is held every two years. In 2013, the four rings welcomed more than 800,000 visitors at the IAA and received numerous coveted awards for its exhibition appearance, including the Golden Nail award from the Art Directors Club in Germany. In 2015, the 66th International Motor Show will open its doors to visitors from September 19 to 27.