BMW works drivers Alessandro Zanardi (IT), Timo Glock (DE) and Bruno Spengler (CA) spent an important weekend at Le Castellet (FR): in preparation for the 24 Hours of Spa-Francorchamps (BE), they contested their first race together in the 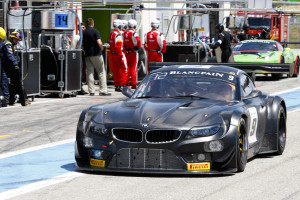 modified BMW Z4 GT3. On Saturday they took part in the 6 Hours of Paul Ricard, which was the third round of the 2015 Blancpain Endurance Series. BMW Motorsport, ROAL Motorsport and the drivers used the opportunity to evaluate under racing conditions the modifications made to the BMW Z4 GT3. Over the past months, the engineers at BMW Motorsport had developed numerous technical solutions that allow Zanardi, who had both legs amputated, to share the car with Glock and Spengler. All the modifications tested at Le Castellet worked well, and the engineers collected valuable information to further optimise the car over the next weeks. In addition, Zanardi, Glock and Spengler got acquainted with the procedures in endurance racing and practiced driver changes. Unfortunately they had to retire after two thirds of the race. During a routine pit stop fluids were leaking from the car and BMW Motorsport and ROAL Motorsport decided not to continue in the race. With the important official 24h test day at Spa-Francorchamps in only a few days, they did not want to risk avoidable damage to the car.

The cause for the problem will now be investigated. “This weekend we saw an awful lot of positives in what we have learnt here,” said Zanardi.

“These include the competitiveness we displayed 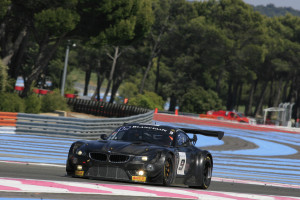 in free practice and the first part of qualifying, in some of the laps that we all put in throughout the the race and in learning a lot as a team, because we are a new team that has to work together and try to live this great adventure which is the 24 hours of Spa. However, as a team we are running a car which does not have a lot of miles on it, and it is very normal that when you run a new car you have this and that piece that needs to be adjusted. We are going home with some very good experiences. I am very much encouraged that we can make everybody at BMW proud with our performance in Spa.” “It was my first race weekend in the BMW Z4 GT3 and I enjoyed it very much,” enthused Glock.

“The car is great; it is easy and consistent to drive. In preparing for Spa-Francorchamps, this weekend was very important for us. We have learnt where we can still further improve the car and how to optimise the driver changes. For sure we would have liked to race into the night, as neither Alex nor I have any experience of driving in the dark, but we will get this in the night practice at Spa-Francorchamps. The race weekend served as a test for us and all went smoothly. Another positive is the fact 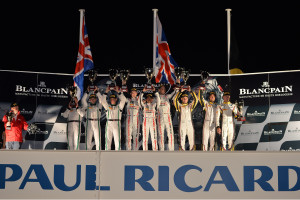 that all three drivers prefer the same set-up. That makes life much easier for the engineers. Now we are fully focused on the test day at Spa-Francorchamps, and then we will try to head to the 24-hour race as well prepared as possible.” “It was very important for us to test here in order to get the experience of a race weekend and to find out how well the modifications work for us,” explained Spengler.

“I have to say that BMW Motorsport did the perfect job. For example, it is not an easy task to optimise the seat and the seating position in a way that makes all three drivers happy. But this has been the case. I did a one-hour stint without any issues. Already everything is working very well, so we only need to fine-tune some details. We would have liked to race a bit longer in order to collect even more experience, but now we will focus on the test in Spa-Francorchamps where the entire team will continue to work hard preparing for the 24-hour race.”

BMW Sports Trophy Team Marc VDS flies the flag for BMW Motorsport on the podium. Markus Palttala (FI) and BMW works drivers Lucas Luhr (DE) and Maxime Martin (BE) finished third in their number 46 BMW Z4 GT3. The official 24h test day at Spa-Francorchamps will take place this Wednesday, 24th June. The 24 Hours of Spa-Francorchamps will be held on 25th and 26th July.